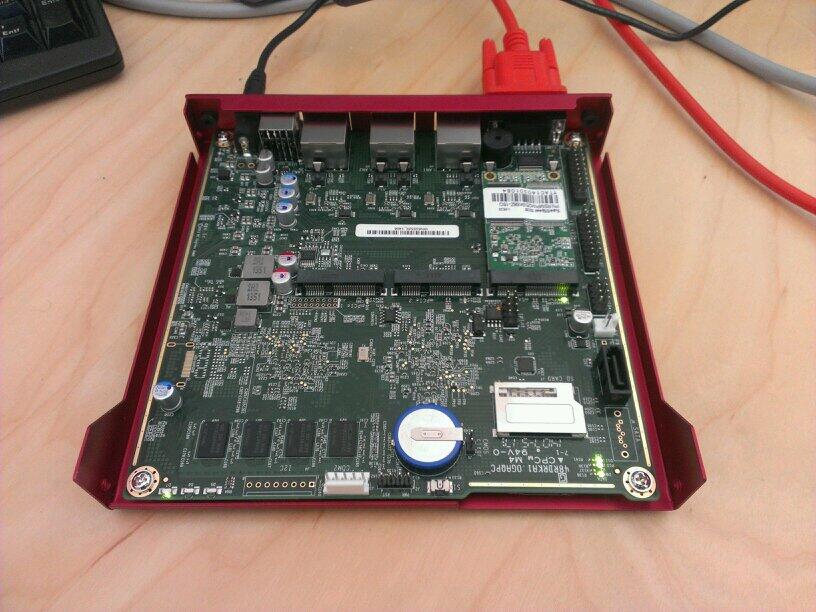 A few days ago my replacement board for the Alix 2D13 arrived. It is a PC Engines APU1C Board with an AMD G series CPU with two cores and 64Bit support. Onboard is an mSATA port which I connected a 16GB flash drive to as well as 2GB RAM, three LAN ports with 1GBit/s speed and an USB card reader. The size is the same as the 2D13 (6” x 6”). I use it as a successor of the Alix 2D13 as my VDSL access router.

There are a few pitfalls that trapped me while installing fli4l. The main topic is that APCI definitely has to be enabled. Otherwise the kernel is not able to assign and use IRQs for the mSATA drive and the LAN ports. This configuration is done via the variable POWERMANAGEMENT. The network ports are driven by a Realtek 8169 chipset. These can be used with the r8169 driver which itself needs some firmware. The latter is provided by the firmware package. So this has to be installed as well. The parameters that I switched while replacing the 2D13 with the APU1C are shown in the table.

With this config I prepared an SD card with the base system from which I installed fli4l to the mSATA hard drive. Another option is to boot the minimal system via PXE network boot.

The opt_hwsupp package provides support for hardware temperature and fan sensors. As the APU1C is not based on the Alix boards the hardware sensors changed. On a fresh debain installation at least the CPU sensor is readable out of the box. The supported module is k10temp.

The rest of the sensors is identified as Nuvoton Super IO sensor. But the driver is not implemented yet: